There’s a case to be made that Torres has not only made fans forget about Gregorius but about Judge as well. 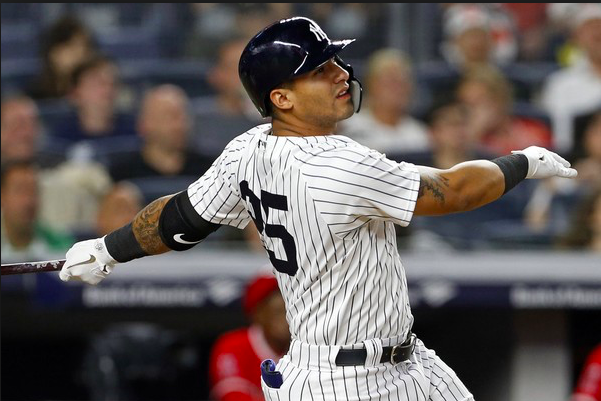 After five years of the Didi Gregorius regime at short stop, the New York Yankees moved on after the 2019 season.  Gleyber Torres has taken over the reins at shortstop this season – his natural position, as he played shortstop coming up the minors.

While Torres played a solid second base, he’s most likely glad to give up the spot to multi-Gold Glove second baseman DJ LeMahieu, who roved around the infield in a utility role in ’19.  With Torres and LeMahieu both in their natural positions, the Yankees up the middle defense should be that much better this season.

Gregorius ably filled the void left by the legend, Derek Jeter and his final line looked like: .269/.313/.446 with 97 HR, 360 RBI’s as a Yankee.  His defense was solid, but not spectacular; he had a .979 fielding percentage in his final season in pinstripes with a -10 DRS.  There were questions about Gregorius’s range.

Not to say 2019 was a typical season for Gregorius, it wasn’t, as he was coming off his rehabilitation from Tommy John surgery, but the signing of DJ LeMahieu and his overwhelming success both offensively and defensively in ’19 made Gregorius expendable, particularly since Torres was seen as ready to take over the shortstop position

It’s Torres’ bat that puts fans in seats at Yankee Stadium.  His offensive achievements at such a young age have catapulted him into the company of Joe DiMaggio and Mickey Mantle.  According to Wikipedia:

On October 13, 2019, Torres became the youngest second baseman in MLB history, third youngest overall (Mantle, Tony Kubek“) to score 4+ RBI in a game, & youngest ever for 5+. He is on pace to amass the most ever extra base hits in a single postseason (8 by Cody Bellinger in 2017).

He started spraying line drives all across the American League from the moment his plane landed on April 22, 2018, he fielded both middle infield positions with flair and reliability. Then he hit 38 home runs this year, and if you want to simply credit all of that to a baseball dripping juice it seems fair to point out that no other middle infielder in the whole sport hit as many.

Gleyber Torres, in short, has become the face of the Yankees – that is in the absence of Aaron Judge, who’s Judge’s Chambers will cheer without their namesake in right field, at least to begin the season.

There’s a case to be made that Torres has not only made the fans forget about Gregorius, but he’s making them forget about Judge as well.  Already on the spring, Torres is hitting .286 with 1 double, 1 home run and 4 RBIs.

Watch out for Torres to have an absolute break-out season in 2020, putting it all together with reliable, solid defense and offensive power and production.  Torres is the superstar the Yankees have been waiting for.